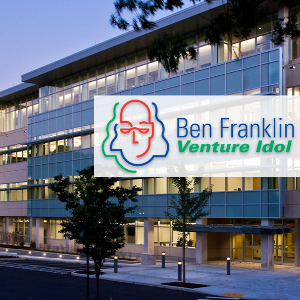 Location:
Via Zoom - credentials will be emailed to registrants on Nov. 8
Email:
BenFranklinVentureIdol@nep.benfranklin.org
Phone:
610-758-5200

Ben Franklin Venture Idol is a cross between Shark Tank® and American Idol®, but with entrepreneurs and investors instead of vocalists and celebrities. After earning their way through an earlier selection process, three technology entrepreneurs will briefly pitch their start-up companies to investors and attendees.

Audience members will vote by allocating “Ben Bucks” among the companies. Ben Franklin Technology Partners will later award a total of $15,000 in real dollars to the companies based on the “crowd-funded” audience vote. Ben Franklin Venture Idol illustrates a significant way in which early-stage entrepreneurs seek and obtain seed capital.